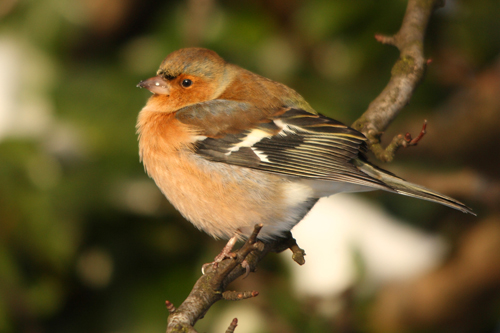 Male Chaffinch
The Chaffinch
Chaffinches are one of the most common breeding birds in the Ireland. During winter, chaffinches from northern Europe migrate here. It is also widespread throughout Europe and into north Africa, the Middle East and western Asia. The Latin name of this bird, coelebs, deriving from the Latin for bachelor, due to the habit of female birds migrating from the northern breeding grounds of Sweden, leaving only flocks of males to remain.

Chaffinches can often be heard calling from perches with a characteristic metallic “pink-pink” call and it’s songs have been found to have regional dialects in different parts of the UK.

Adult chaffinches feed mainly on seeds and in autumn and winter will often flock with other seed eating species. It is worth checking winter flocks of Chaffinch for the rarer Brambling. This year has been an excellent year to see Brambling in Northern Ireland.

The Chaffinch uses moss, lichen and spiders’ webs to build a nest, sometimes using pieces of bark taken from the tree in which the nest has been built as camouflaged. They normally lay between three and six eggs, which the female incubates for up to 14 days. Normally only one brood is produced each year. Chaffinches have been known to live for over 11 years though, 3 years is more typical.

The use of agricultural chemicals and changes in farming practice affected the Chaffinch populations in the 1950’s but have now recovered and are stable. Chaffinches have introduced to South Africa and New Zealand