In the Wake of the Storm 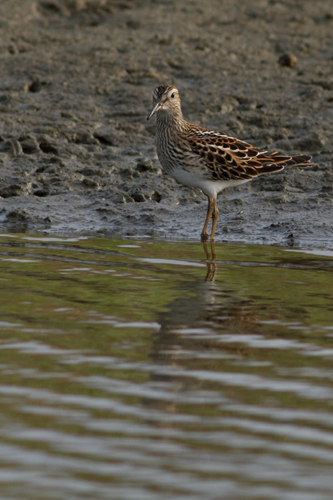 Pectoral Sandpiper, Myroe, L/derry
Vagrants from the West
For most of the past month Ireland seems to have been battered by deep low pressure system after deep low pressure system. The positioning of the Jetstream have brought these systems have tracked right across the Atlantic, many the remnants of hurricanes. The winds as they have moved up the eastern seaboard of America can pick up within them migrating birds, especially waders.

Up here in the north the depositing of these birds seems to a little less impressive, though I did seen a Pectoral Sandpiper last Saturday morning at Myroe, Co Londonderry and a Buff breasted Sandpiper on Malin Head, Co. Donegal, and earlier in September a Semi-palmated Sandpiper at the Bann Estuary. Any flock of waders or wetland area is well worth a check, you never know what might be lurking there waiting to be found. An American Golden Plover and Buff Breasted Sandpiper have also been seen in Co Down in the past week.

Iceland for example has already had multiple Long-billed Dowitchers. American Golden Plover and a Lesser Yellowlegs. Once these birds have recovered the urge to continue to migrate south may take over and they may well follow the same route as our commoner waders and arrive in Northern Ireland over the coming weeks. And it’s not just waders, Iceland has also recently hosted a Northern Parula a stunning little American warbler.

If you are interested in finding/seeing American birds on this side of the Atlantic this is the year to get out and have a look.