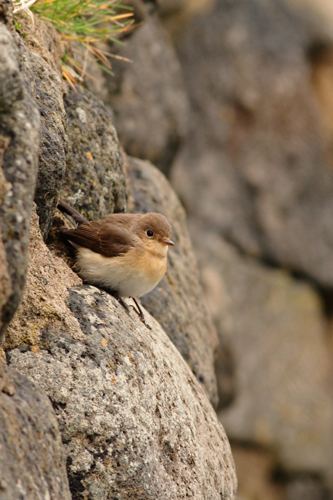 Red Breasted Flycatcher, Ramore Head, Portrush
Enough to Brighten any Wet Saturday
Saturday was grey and at time wet. A day to catch up things around the house with my family and maybe sort some photos. All was well until just before 6pm when a text message was received. What wonderful bird had they found in Donegal I thought, with no chance of me getting over to see it. As I read it my heart sped up immediately. Not Donegal, but only about 15 miles away!

Birders Mathew Tickner and Denis Weir had reported a really rare bird and were still watching it! One problem my wife and son were at the shop and I wasn’t sure if they had keys, I could just lock them out, no I couldn’t I thought. Whilst I waited I got changed and got my camera ready.

The bird was at least 25 minutes away and given the light conditions it would be too dark for photographs within an hour. As soon as my wife arrived back I was off, driving right at the speed limit the whole way to Portrush. The frustration of tractors and sightseeing drivers (that’s why there are so many car parks to admire the views along the North Coast!) added the tension.

Finally I made my way around the one way system of Portrush to the Landsdowne car park. But where was the bird? Ramore Head is not a large area but the light was already fading fast. I gathered my gear from the car and instantly relief – the sight of three birders just near the start of the path. I could sense from the look on their faces the bird was still present as I approached.

Mathew kindly let me have a look through his scope at this stunning little eastern traveller. Straight away though I knew if I was to get any sort of shot I would have to work fast. Camera onto a tripod, ISO up to ratings I rarely use and start firing, adjusting settings all the time to fine tune exposure and try to maximise the quality of image.

A quick check of the images suggested I had something reasonable given the conditions, so I could relax a little and enjoy the bird. Another birder arrived who made a similar dash to Portrush. But all too soon the bird left the area it was feeding in, flew up onto a nearby slope and disappeared into some gorse, hopefully to roost for the night.

What was this bird? A beautiful little Red Breasted Flycatcher, possibly only the second ever seen in Northern Ireland. This is a bird I have dreamt of finding along the Ballycastle Coalfields, and will certainly renew my efforts of finding an eastern migrant in this area! This species breeds across eastern Europe and central Asia and winters in south Asia.