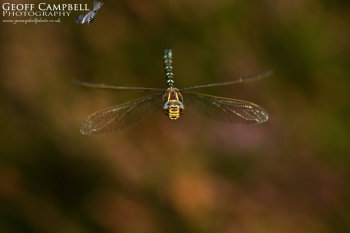 A photograph years in the making
Sometimes good photos just happen, others can be months or years in the making. Whilst technically not always the best images, it is the latter I enjoy taking and cherish the most. Often I will have an image taken in my head and then set about working out how to capture it for real. Whether it be a Badger in Bluebells achieved several years ago after many evenings sitting in the dark in a local wood, or to be eye to eye with a Hawker dragonfly in flight while standing for hours in water being feasted on by midges, or the Pine Marten in an oakwood that I still work towards. Yes, I could pay to sit in a hide to snap Pine Martens, but it wouldn’t be my image, the one in my head, the one I will have spent many hours working towards. Click on any image to enlarge. 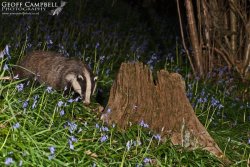 One such image I have thought about for many years involves another insect in flight. As a youth I spent days in the raised peatbogs between Randalstown and Ballymena. Each spring I would see mysterious, fast moving butterflies skim across over the heather, only to find when I actually caught my first one, it wasn’t a butterfly at all, but a day flying moth – the stunning Emperor. 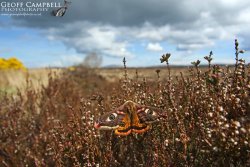 I have observed and photographed male and female Emperors at numerous sites and they remain a firm favourite species, but what I really wanted was to capture was one these beauties in flight over a local bog. Each time I have seen one I thought to myself, how? Since really becoming hooked on moths four years ago, the desire to capture this image has grown, but each year I failed. Torn ankle ligaments kept me out of action at the key flight period one year, whilst poor weather conditions and other commitments resulted in failures in others.

The apparently never ending winter in 2018 was looking to put pay to chances this year until last weekend when the cloud and gloom broke to leave calm and bright conditions, this could be my chance. For several hours on Saturday afternoon I was to be found lying on the wet surface of a North Antrim peatbog, with a wide angle lens snapping dozens of images, hoping to get one where the moth was in right location and flying at the right angle whilst within a very narrow focal range to keep the shutter speed high enough. We photographers don’t ask for much! Then back home to download the memory card and wade through the images of no moths, half moths or, worst of all, moths in the right position but too far away or too close to be in focus, becoming more and more despondent. Then an image opens and maybe, just maybe, this is the one. Perhaps it could be a little sharper, the light could be stronger, but not one, but two male emperors in flight over a raised bog with the Antrim Hills in the background, this is what I got wet and dirty for. With the pressure off I can go back to sorting images with a mixture of relief and satisfaction. 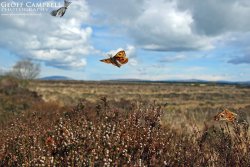 So the day after getting the shot you want, what do you do? Well the suns out so you try again for something a little different. The light is stronger, the sky is even bluer and this was the best result of day two. 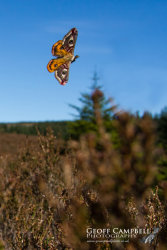